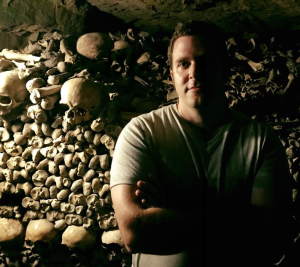 Kristopher Triana is a Splatterpunk Award winning author. His works include Full Brutal (Awarded Best Novel at the 2019 Splatterpunk Awards), Toxic Love, Shepherd of the Black Sheep, The Ruin Season, Body Art, The Detained and Growing Dark. His fiction has appeared in many magazines, anthologies, audio books and on websites, and has been translated to multiple languages. His fiction has drawn praise from Publisher’s Weekly, Rue Morgue Magazine, Cemetery Dance, Scream Magazine and such prominent authors as Brian Keene, Jack Ketchum, Bryan Smith and Ryan Harding. While primarily a horror writer, he also writes crime fiction, literary fiction, noir and westerns.

Born in New York in 1977, Triana was yanked down to Florida at the age of nine and was forced to grow up there, much to his chagrin. Luckily he had heavy metal music and John Carpenter movies to get by on. Once he was old enough, he escaped all that pesky sunshine and since then he has lived up and down the east coast, from New England to the rural Carolinas. He is obsessed with all aspects of the horror genre and has amassed a staggering collection of cult films, horror books, movie memorabilia, busts and Halloween masks. He also has a very strong love of animals—especially dogs.

He lives in Connecticut.